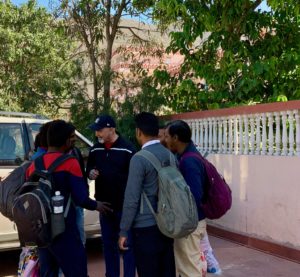 Paul* was a young law student, living in a large South Asian city with a major university.  Raised in a Hindu family, he had participated in all of the festivals and rituals of his family’s faith but knew something was missing.

When we sat down with Paul last month, he told me the about the day things began to change. Paul  saw our Missionary friend Cathy* waiting outside the cell phone store. Cathy had arrived right when the shopkeeper closed the store for lunch – so Cathy decided to wait on the sidewalk outside the store.  She frantically paced back and forth in the hot sun waiting for the time to pass.

Paul first noticed Cathy as he passed by on his way home from school.  He returned to a store across the street 10-15 minutes later and saw the mature westerner still waiting alone in the hot sun.  Finally, Paul crossed the street and walked up to Cathy and asked, “Excuse me, do you need help?” to which she responded, “Oh, you speak perfect English!  Yes, could you help me?”

Shortly the store opened again and Paul helped Cathy solve the problem with her phone.  They left the store, grabbed some tea, and the friendship started.

For the next few weeks the young lawyer listened to the widow he simply calls “Mom.” She told him the stories of the life, death and resurrection of Jesus.  As the Holy Spirit worked in Paul’s heart, he gave his heart to Jesus. Paul was overcome with emotions after he prayed and the thoughtful young attorney clapped his hands and cried with joy.

In the months that followed, Paul shared his faith many times with other students at the University.  Every time he told a story  –  they wanted to know more and soon Paul was surrounded by other new believers. The incredible response of these students turned into a movement of the Gospel that is spreading throughout the region.

Today Paul is the national leader of a storying movement that is impacting thousands of young adults and middle-aged couples.

Are you expecting God to put people in your path? Are you longing to see a movement of the Gospel?